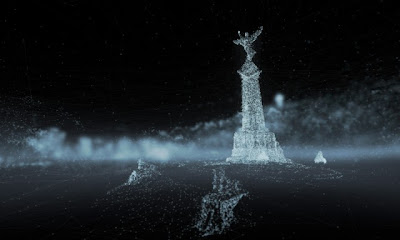 The main exhibition for ISEA2012 was displayed at a total of seven venues. It is based at both The Albuquerque Museum of Art & History and 516 ARTS, with off-site projects at the following five Anderson-Abruzzo Albuquerque International Balloon Museum, the New Mexico Museum of Natural History, the Rainosek Gallery at the UNM School of Architecture & Planning, Richard Levy Gallery and the Alvarado Urban Farm. The exhibition features work that combines art, science and technology, demonstrating the role art can play in re-envisioning the world. The over 100 artists are from 16 countries: Austria, Brazil, Canada, Finland, France, Germany, Italy, Korea, Mexico, The Netherlands, New Zealand, Portugal, Scotland, Spain, the U.K. and the USA. The exhibition was juried and curated through an international call for proposals, which drew close to 1,500 submissions from artists and presenters around the globe. The exhibition is accompanied by a catalogue published by the acclaimed Radius Books, which will be distributed internationally.
It was a massive attempt to integrate electronic arts and the ecologic movement and as such deserves praise for both ambition and achievement.
Posted 11 hours ago by Martin Rieser
Labels: New Technology Workshop/conference Exhibition Public Art Interactive art Interactive Narrative installation GPS Mapping New Interfaces locative psychogeography
Posted by Martin Rieser at 08:52 1 comment: