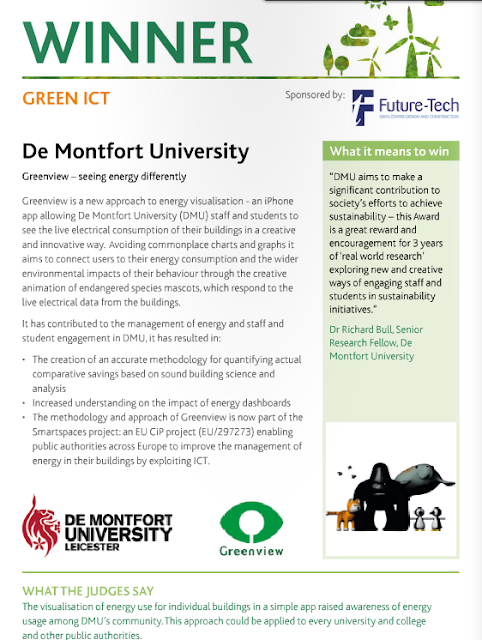 We're delighted to announce that we won the Green ICT category in the EAUC Green Gown Awards last night. It was a fantastic evening and we were thrilled to share it with many familiar faces from the last few years alongside our colleagues from DMU's Square Mile Project that also won in the Social Responsibility category and the International Social Responsibility category. Particularly poignant for me as the event was held in the beautiful Great Hall at the University of Birmingham.

There were  key people without whom which this project would never have happened. Firstly - our sponsors/funders, JISC - Rob Bristow at the Greening ICT group at JISC has supported us tirelessly and without JISC funding this project, and its predecessor, DUALL. could never have happened. Second, the team behind the Greenview app from IOCT and IESD - Richard Bull, Dave Everitt, Gareth Howell, Graeme Stuart and Martin Rieser. Thirdly, the sustainability team at DMU are amazing - Karl Letten and Paul Fleming in particular. Finally, the IESD and the Faculty of Technology at DMU have been incredibly supportive of our, at times, slightly unorthodox ideas about energy visualisation.

Oh, and last but not least, thank you to to the EAUC for the award. We're very grateful.
Posted by Martin Rieser at 09:54 No comments: